There’s not a whole lot to say for today. Like Friday, I wasn’t there for too long.

I got to the con at about 9:30 AM again and went to the Dealer’s Den when it opened at 10. I did a sweep of the floor again before deciding what to buy – the first season of Darker Than Black on DVD from an anime stall and a Mystery Bag from a stall that sold misc. items (not anime and manga itself, but posters, figures, art books, etc.) which was $20 but the contents guaranteed to be from $40-$70. I also saw a different anime retailer selling the Umineko no Naku Koro ni premium box sets (Incidentally, since I’ll never pass up an opportunity to plug the series, if there’s one visual novel series I recommend anyone 17 or up read, it’s Umineko, available online and translatable into English. Read up on it on the Witch Hunt translation crew’s page. The series will be like reading several Harry Potter novels at a slow pace, but it’s WORTH IT), but had to pass them up because they’re just so darn expensive right now ($110 for 24 half-hour episodes, not even dubbed). If they’re ever sold as basic packages (not special editions), they’ll be insta-buys for me.

I was hesitant about the bag because it stands to reason that one of the most dangerous places to purchase a Mystery Bag/Box is an anime convention, but I figured eh, YOLO.

Inside the mystery bag were 5 items, all pretty much aimed towards girls and all of which I don’t really want (I knew that was a likely result, though).

So here’s the spoils: 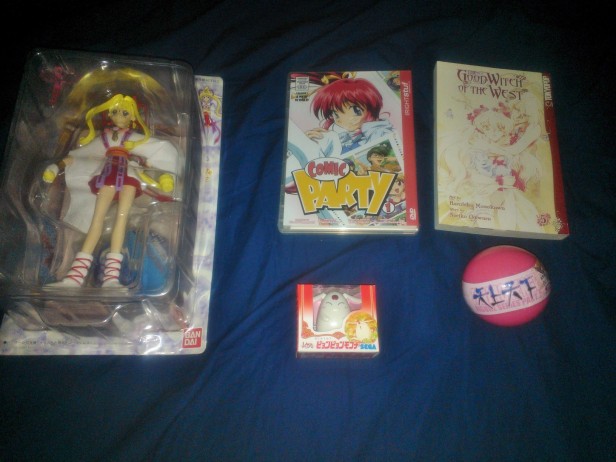 I will attempt to describe everything: The leftmost figure is from Japan. There is a mini-CD inside which reads ‘Kamikaze Kaito Jeanne’, which is enough to have a Wikipedia search do the rest. There are also pictures of small LCD electronics on the back, but I don’t know if they’re included or not – there’s some plastic behind the CD which may contain something like that, but it’s hard to see without opening the package. Who knows what’s inside? Certainly not me…

The Comic Party thing is an anime DVD (volume 1) in English with I assume four episodes of the show. The show concerns Taishi and Kazuki, the main characters, drawing fan comics of established anime (the box mentions Gundam, Evangelion, Initial D, and Wedding Peach as being spoofed). So it seems like comedy. For ages 13 and up. It is factory sealed.

The book is The Good Witch Of The West Volume 5, in English. Not much to say about this… you probably want parts 1-4 first 😛

The minifigure in the box is from Japan, and reads Rayearth at the bottom, which is good enough for a Wiki search. The back has pictures that depict it walking if you turn the figure’s tail.

Lastly, the ball thing is a mystery. There’s English behind the Japanese logo, but it’s unreadable. It’s a small figure and there’s a picture of a swordswoman on it. That’s all. Oh, and the small text mentions avex and Geneon. Not much to go on.

If you know me in real life and want any of these things (or all of them), just ask. Otherwise, I might dump them in the anime club room while nobody’s looking and run away 😛

After all that excitement, I had lunch and went over to the only panel that I attended this day: Science in Kingdom Hearts. I didn’t really accomplish anything other than having Dream Drop Distance spoiled (more) for me. Right now the series seems like such a jumbled mess of concepts that I doubt even Square Enix knows 100% what they’re doing. To sorta-kinda illustrate the ‘jumbled mess’ thing I made the below picture: 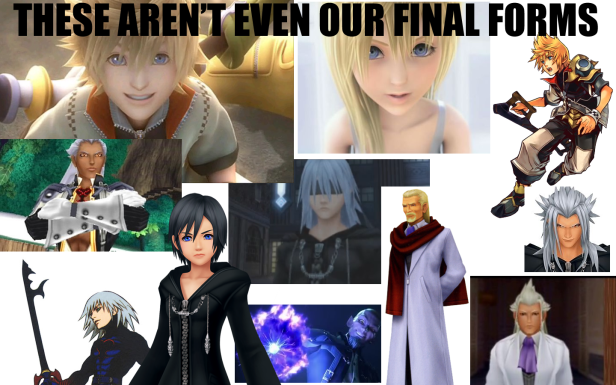 I could have easily added more to this. For example, Terra, Sora, Riku, Xion’s forms from the end of 358/2 days…

What they did discuss was, among other things, were how worlds connected to each other (not in space, but on the light-dark scale, for example, the Dark Margin is situated between the realm of darkness and the realm of light, and Twilight Town is on the edge of the realm of light), and what’s up with those several forms of Xehanort/Xemnas/Ansem/Terra/Young Xehanort/Bob anyway. I didn’t really walk away being any smarter about that stuff than when I came in.

Afterwards, I didn’t see any panels on the schedule that I wanted to see, so I decided to leave – but not before going back up to outside the Dealer’s Den to try and get a picture taken to commemorate my passable attempt at cosplay. It turned out to be a good thing, because who should I meet up there but… 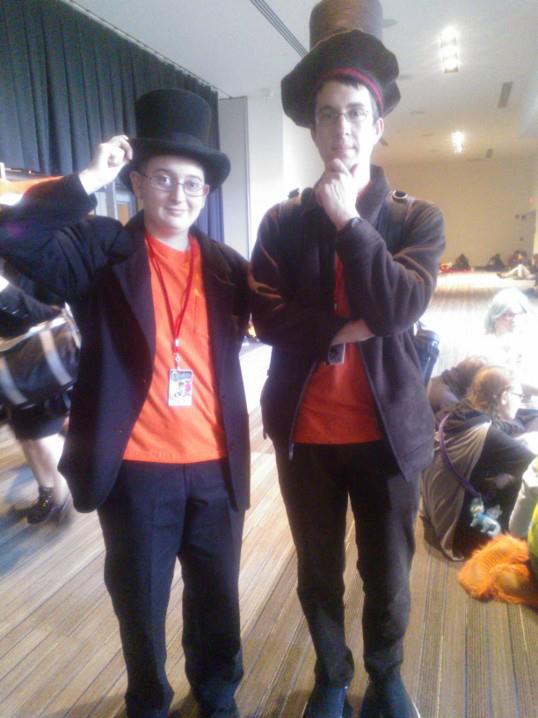 Yes, that’s right, another Professor Layton cosplayer! He was dressed in black instead of brown, which actually works (some cosplayers have done so before, but I wasn’t sure how different that would make Layton look). Accompanying him was the very same girl I met on the first day who took a picture of me and had trouble with her camera’s batteries (apparently she has a thing for hunting down Professor Laytons). So we all talked for a bit, had a warm fuzzy group hug (because the girl also has a thing for hugging – she hugged me four times over the course of two meetings), and went our separate ways. I realized that my Layton hat was starting to fall apart a bit, and the best pictures were probably behind me, so I simply left without getting my picture professionally taken.

And… that was that. The end of Ohayocon for me. I’ll probably don the Layton apparel again soon (I have some occasions in mind) and generally be annoying with it to people. As for the con, I had fun with it and was sad it ended so soon. If I happen to be in the area next year (which is in doubt because I’ll have graduated college by then), I will definitely do the convention again (and preregister so I don’t waste so much time in line).

This next weekend is the Global Game Jam. While I probably won’t be doing anything again (despite organizing it for my location), I will probably spend most of the time working on Jack’s Run.

One thought on “Professor Layton and the Anime Convention Part Three”