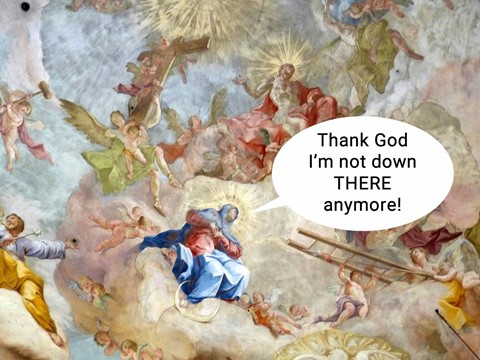 If you are a Christian, or are familiar with them, then at some point you have probably heard a phrase like ‘Christians should be in the world but not of the world’. I happened upon a certain website that used this concept (incorrectly) as a reason to attack Christianity. According to them, we simply do not care about this world and have no reason to, especially since we know we are bound for heaven and are only ‘passing through’, so to speak.

First off, before we show how this interpretation is false, let’s go over the origin of the saying ‘in the world, but not of the world’. In John 17:14-18, we find Jesus praying to God on the very night before His crucifixion. He prays:

The ‘them’ in this quote refers to Jesus’ followers, the ‘people whom you [God] gave me out of the world’ in John 17:6. Now let’s break this down a bit. ‘In the world’ is straightforward. It refers to those people who are physically in the world. People in the world can of course be both Christian and non-Christian. The part about being ‘not of the world’ is not quite as intuitive from the standpoint of someone hearing this for the first time. The website I mentioned in the first paragraph would likely interpret it to mean that Christians should distance ourselves from everything having to do with the world as much as possible.

The trouble with that interpretation is that it flies squarely in the face of many (and I do mean MANY) teachings in the Bible that teach us to be very concerned with this world and those who are in it, both Christian and non-Christian. Within just the first part of the Gospel of Matthew, the Bible tells us: that John the Baptist, the forerunner of Jesus, preached to all about His coming (Matt. 3:1-3), that Jesus ministered to great crowds without prejudice (Matt. 4:23-25, and many other places), that we cannot hide ourselves away (5:14-16), that we should teach others the commandments (5:19), that we should make peace with those who do us wrong (5:21-26, 6:14), that we should give to those in need (5:42, 6:1-4), and that we should love our enemies (5:43-48). And that’s only the first five chapters! At the very end of Matthew, a resurrected Jesus tells the eleven remaining disciples to go out and to make disciples of all nations and to teach all that Jesus commanded, which included living selflessly, loving others, and living a godly life while teaching others how to do the same. To say that the duty of a Christian is to not care for anyone else is most likely the result of cherry-picking the Bible for only those verses that support that particular interpretation.

So now that we know what being ‘not of the world’ DOES NOT mean, what DOES it mean? We live in this world regardless of our saved or unsaved status, but the saved recognize God’s kingdom, a kingdom not of this world. We know of it, we subscribe to it, and we are of it. At the same time, by the grace of God we reject our sinful natures that are characteristic of those in this world. While non-Christians are content to live by whatever relative morals they find reasonable as a result of the Fall, when sin entered the world through Adam and Eve, Christians follow an absolute set of God-given morals given to us by a glorious creator who knows what He wants to do with us. So, with that in mind, we can summarize ‘not of the world’ as not being subject to the sin inside the world, and instead being bound to a heavenly, eternal kingdom. Our role in the kingdom, however, commands us to be concerned for the ultimate welfare of all on Earth.

The website Desiring God discusses perhaps a better phrasing of the saying: “Not of the world, but sent into the world”